← back to
Pyramind Records
Get fresh music recommendations delivered to your inbox every Friday.
We've updated our Terms of Use. You can review the changes here. 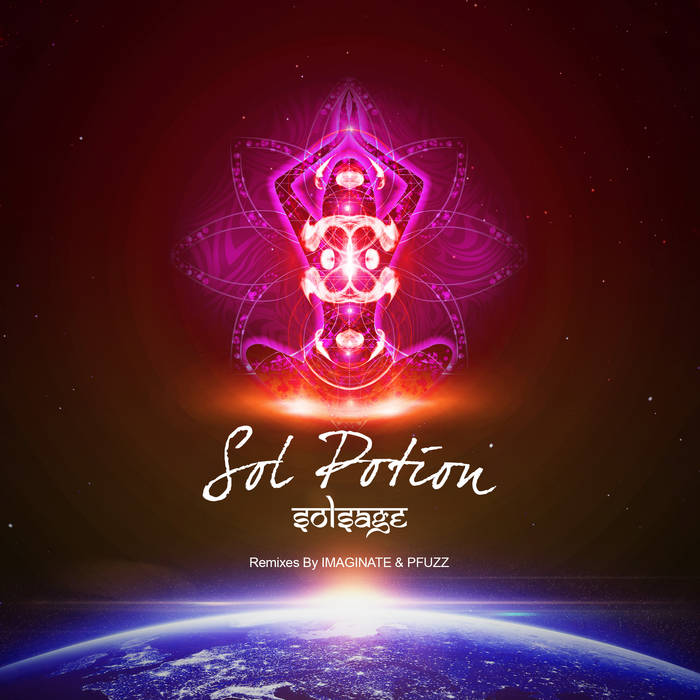 Solsage, invites the listener on a mystical journey filled with ethnic instrumentation and infused with arpeggiating synth bass lines and psychedelic overtones. The chanting female vocal and invocation tells us “Drink Me Like A Sweet Sol Potion”. In a time of anguish and difficulty, each one of us is looking for that magic potion to return to a happier time. Sol Potion reveals both the dark and the light in each of us and the ultimate acknowledgment that the elixir of happiness can only be found within.

Danny Dignin aka Imaginate, takes us down the darker and distorted depths of our beings with his remix of Solsage's "Sol Potion" by creating a mixture concocted of evocative atmospheres and melodies in contrast with gritty and sobering bass lines. Underneath the production is a veiled vocal carefully and purposeful whispering, "drink me" as an invitation into the illusory world.

PFuzz, has a musical style that melds her passion for electronic music with her classical violin training. Her Sol Potion remix creates a downtempo chill-vibe, layered with lush sound design, glitchy effects, and atmospheric soundscapes. Her remix is filled with exciting ear candy, a groovy ethereal vibe, and the incorporation of glitched out acoustic violin sounds.

Written and Produced by Gregory J. Gordon AKA Solsage
Violin By Alexis Harris
Vocals By Elana Solari and PFuzz
Remixes By Imaginate and PFuzz

About Solsage
A native to San Francisco, Solsage is the electronic music producer alter ego of Pyramind founder Gregory J. Gordon. Through his years owning and operating Pyramind Studios, he has worked behind the glass and in front of the mix with many artists ranging from Rob Garza (Thievery Corporation), Jef Stott (Six Degrees Records), Irina Mikhailova, Giorgio Moroder, Rain Phutureprimitive (Samskara/Full Dome 360), K Theory, The Bronx, Cheap Time, Meat Market, Merl Saunders & Jerry Garcia (The Grateful Dead) and Rocker T & the legendary Joan Baez. His nineties based DJ collective Native Budz helped to launch the Bay Area Trip Hop sound and was signed to Priority Records. He is a 25 year voting member of The Recording Academy (The Grammys) where he has served as both a Governor and Trustee at the highest level.

About PFuzz:
PFuzz, is a Berklee College of music Alum, classically trained violinist / violin instructor and music producer, who relocated to the San Francisco Bay Area 4 years ago. Her passion for electronic music, especially when stemming from classical and jazz roots, brought her to study at Pyramind in 2019.
A few of her notable influences include Niccolo Paganini, Bach, Rachmaninoff, The Prodigy, Amon Tobin, Noisia, and Wolfgang Gartner. Her music integrates her classical training along with her love for glitchy sound design and electronic music.

Music for human consciousness & planetary awakening. Let's save our species from extinction before it's too late!

Guests John Beltran and Kim Myhr walk us through their magical musical adventures.